One Canadian said it felt like a painful poke to his brain. An American heard crunching sounds in her head. A Frenchwoman suffered a severe nosebleed. Others got headaches, cried or were left in shock.

They were all tested for COVID-19 with deep nasal swabs. While many people have no complaints about their experience, for some, the swab test — a vital tool in the global battle against the coronavirus — engenders visceral dislike, severe squirming or buckled knees.

“It felt like someone was going right into the reset button of my brain to switch something over,” Paul Chin, a music producer and DJ in Toronto, said of his nasal swab test. “There’s truly nothing like it.”

“Oh, my goodness,” he added, “the swab just going farther back into my nose than I’d ever imagined or would have guessed. It’s such a long and sharp and pointy kind of thing.”

Since the coronavirus emerged, millions of swabs have been stuck into millions of noses to test for a pernicious virus that has killed millions across the planet. One of the ways to fight the virus, officials say, is to test widely and to test often. The imperative has been to use a test that people are willing to take repeatedly.

The swab generally fits the bill.

In some parts of the United States, health workers hand people the swab to test themselves, assuring a level of personal comfort. To many South Africans, the only COVID-19 test is a painful one — you see stars or gag because a swab goes down your throat.

The range of swabbing raises questions: Who is doing it right? How deeply should the swab slide into your nostril? How long should it spend up there? Does an accurate test have to be uncomfortable? Unfairly or not, some countries have reputations for brutal tests.

First, a brief anatomy lesson: No, the swab is not actually stabbing your brain.

The swab traverses a dark passage that leads to the nasal cavity. That is enclosed by bone covered in soft, sensitive tissue. At the back of this cavity — more or less in line with your earlobe — is your nasopharynx, where the back of your nose meets the top of your throat. It is one of the places where the coronavirus actively replicates, and it is where you are likely to get a good sample of the virus.

Wariness about the test may arise from a simple fact: Most people cannot stand having something shoved so far up their nose. Furthermore, the tests conjure some of our darkest fears: of things that can crawl into our orifices and burrow into our brain.

“People aren’t used to feeling that part of their body,” Dr. Noah Kojima, a resident physician at the University of California, Los Angeles and an expert in infectious diseases, said about swabs touching the nasopharynx.

Pain enters the picture when the swab — a tuft of nylon attached to a lollipop-like stick — is administered at the wrong angle, said Dr. Yuka Manabe, a professor of medicine specializing in infectious diseases at Johns Hopkins University School of Medicine.

“If you don’t tip your head back, you don’t get to the throat,” she said. “You’re smashing into someone’s bone.”

Chin described his test as a “brain poke” and compared the burning sensation to the effects of breathing in spice.

“Your whole face is kind of ready to leak,” he said, adding, “I don’t really know that there’s any way to be prepared for it.”

There are three main kinds of COVID nasal swab tests: nasopharyngeal (the deepest), mid-turbinate (the middle) and anterior nares (the shallow part of your nose). Early in the pandemic, the deep nose swab was administered widely and aggressively to adults because the method worked when testing for influenza and SARS. Although the science is evolving, experts tend to agree that the deepest swab is the most accurate.

According to a review of studies published in July in PLOS One, a science journal, nasopharyngeal swabs are 98% accurate; shallow swabs are 82% to 88% effective; mid-turbinate swabs perform similarly.

“Depending on the skill of the medical staff, it may or may not hurt,” he said. But he said: “The nasopharyngeal test is the most accurate. That’s why we keep doing them.”

The WHO has guidelines about how best to test; complications have been rare. Australian guidelines say swabs should go a few centimeters up adult nostrils. The U.S. Centers for Disease Control and Prevention says the mid-turbinate swab should usually be inserted less than an inch, or until it meets resistance. Some testers swab both nostrils.

The KDCA’s guidelines allow testers some leeway on how to scrape the nasopharynx (wiggling or spinning the swab, or both). Choi said the experience depends on the brand of swab, the patient’s pain tolerance, the anatomical structure of the nasal cavity and the tester’s proficiency.

Some argue that nose swabs rank relatively low on the scale of squeamish coronavirus tests.

This article originally appeared in The New York Times.

Cast your vote for Pennsylvania’s 2022 ‘River of the Year’

HARRISBURG, Pa. (WTAJ) — Online voting is now open until mid-January for the 2022 Pennsylvania River of the Year, choosing among four waterways nominated throughout the state.

The Catawissa Creek, Connoquenessing Creek, French Creek and the Monogahela River are all nominations, according to the Department of Conservation and Natural Resources (DCNR) Secretary Cindy Adams Dunn. Nominations closed Nov. 15, and these four were selected based on each waterway’s conservation needs and successes.

Online voting for the best of the four rivers runs from today until Jan. 14 at 5 p.m. Information on how to vote will be made available on the Pennsylvania Organization for Watersheds and Rivers (POWR) website. More details about the River of the Year program can be found there, as well.

After a waterway is chosen for the annual honor, local groups implement a year-round slate of activities and events to celebrate the river, including a paddling trip, or sojourn, Dunn said. The organization nominating the winning river will receive a $10,000 leadership grant from DCNR to help fund River of the Year activities.

“The value of our waterways has shined brighter than ever during this pandemic as people have visited Pennsylvania`s river and streams in unprecedented numbers seeking the natural refuge they supply,” Dunn said. “This annual competition is so much more than a popularity contest. All of our rivers and streams have truly unique attributes, offer incredible recreational opportunities, and offer significant boosts to local economies.”

POWR, an affiliate of the Pennsylvania Environmental Council, administers the River of the Year program with funding from DCNR. The 2021 designation was awarded to the Shenango River.

POWR and DCNR also work with local organizations to create a free, commemorative poster celebrating the River of the Year.

For more information about DCNR’s Rivers Program, head to their website under “conservation” and then click “water.”

Sign up for the WTAJ Newsletter for the latest local news, weather, and community events that matter to you.

Are we about to get a big unveiling of Breath of The Wild 2, complete with a release date and title? It’s possible – as The Game Awards for 2021 are imminent and it seems there will be some impressive announcements at the show, including the ‘world premiere’ of a major title.

Organizer Geoff Keighley tweeted to say that the big reveal has been in the works for two and a half years – roughly the amount of time that’s passed since the last BOTW 2 trailer – and that he’s truly honored to share it. Unsurprisingly, this has fanned flames of speculation around what this game might be.

Just saw the final cut of a #thegameawards world premiere we have been working on with a developer for 2.5 years. Truly honored we are entrusted to share this work with the world.November 28, 2021

Cue quite a flurry of theories about how the most likely candidate here is Breath of the Wild 2), the hotly anticipated Nintendo Switch sequel which is due out next year.

Now, there are arguments against this possibility, namely that it wouldn’t be a “world premiere” considering that Breath of the Wild 2 has been shown off a couple of times (though announcing its official name and release date could still qualify for this term). BOTW 2 was first teased at E3 2019, and then we were treated to another presentation of the game at E3 earlier this year.

With that in mind, let’s dive into the details of why this could still be BOTW 2…

Analysis: What’s in a name? Quite a lot, really

For starters, as Nintendo Life, which spotted the above tweet, points out, there have been instances in the past where so-called premieres for The Game Awards have been aired for games that have already been glimpsed.

Then there’s also the fact that we know Zelda series producer, Eiji Aonuma, has said that development is proceeding ‘smoothly’ on the sequel and that we will get more information this year. Aside from what was imparted at E3 2021, we could still get more info before 2021 is out – particularly considering that 2022 is a broad, and immediate release window, and we don’t yet know the exact date to expect the game to launch.

Remember, we don’t have an official name for the game either, so it’d make sense for that to be revealed (alongside further footage or a demo of some kind). Nintendo has said before that it is deliberately holding back on revealing the name of the sequel, as it will give some clear clues as to what the game will be about. So, giving us the official name would be an obvious move to make with the ‘premiere’ – but this is all conjecture of course.

In short, the idea of BOTW 2 fits well enough here, but it could be something else, of course – maybe that Metroid Prime 4 game we’ve been hankering for, or a remake of Prime 1, after Metroid Dread stoked excitement for the franchise yet again?

As an aging widower begins suffering from cardiac trouble, his greedy heirs hire a super-seductive nurse in the hopes of inducing a heart attack, but the plan backfires when she falls in love with him.

Leonida Bottacin, the grizzled owner of a wine industry in Treviso and lucky cardiac arrest survivor, is on the verge of death. As a result, Leonida’s rapacious heirs start flocking in his villa, eager to sell his business after his death. However, with Leonida still alive, it is impossible to seal the deal with an American buyer, and their hands are tied. Then, to speed up things, Leonida’s son-in-law, Benito, enlists the help of sensual nurse Anna, his curvy ex-girlfriend, to put a smile on Leonida’s face and give him a fatal second heart attack. Does poor Leonida stand a chance of survival? 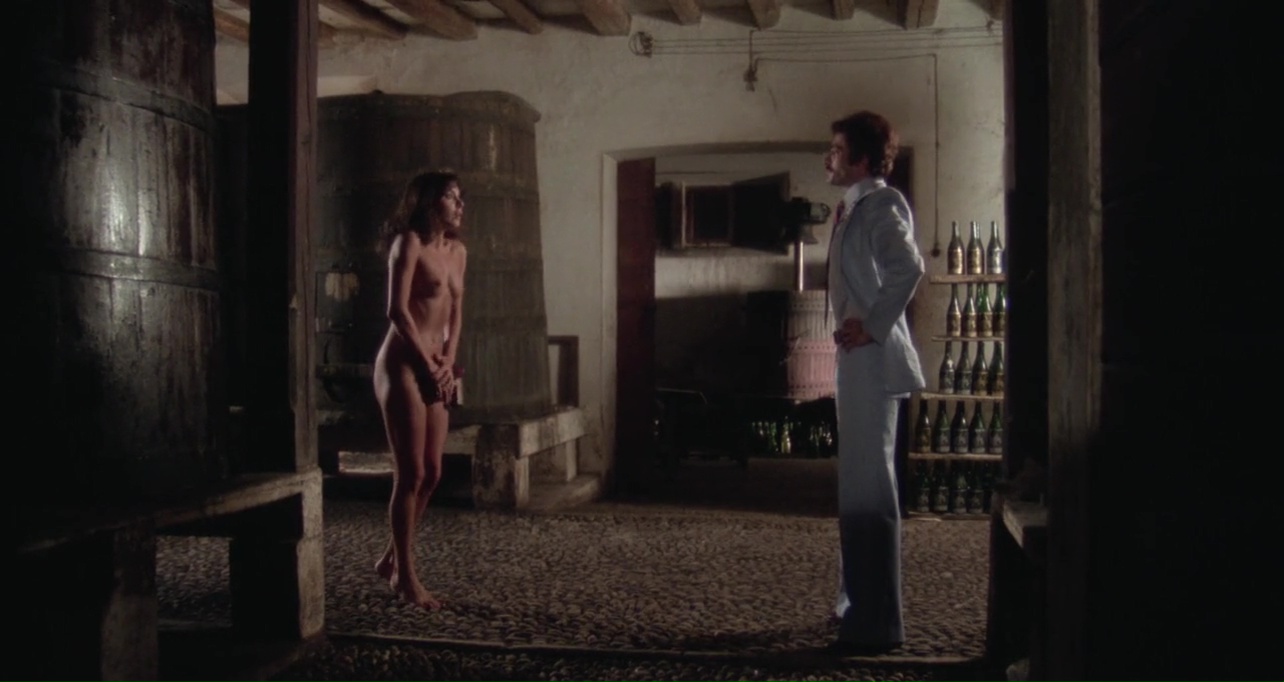 Thanks For Downloading The Sensuous Nurse (1975) Full Movie In Hindi-English  480p & 720p From HDPrime HUB.

Slogged through finding and reviewing this for one scene. Italian sex comedy says it all. Saw it on Cinemax, or equivalent, in the 80’s and remember Jack Palance stroking the pubic hair of a naked young gal stretched across his lap. And Bond villains stroke cats!?! Bond gals at the height of their powers, what’s not to like. The gal on Jack’s lap deserves mention somewhere, and whoever conceived that setting.