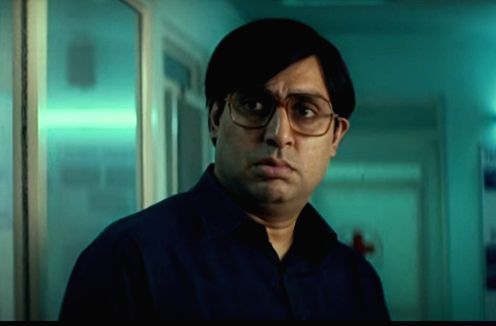 The film is a spin-off to the earlier ‘Kahaani’ released in 2012, in which Bob’s character was portrayed by Saswata Chatterjee.

Despite being a Bengali actor without having any presence in Hindi film before, the character and the performance of Saswata were so appreciated by the audience nationwide, it was only natural to expect him to see as ‘Bob Biswas’, as the face of the character.

However, the news of Abhishek will be playing the title role of ‘Bob Biswas’ surfaced in 2019.

Talking about why Abhishek is cast, writer Sujoy Ghosh told IANS: “It was a very conscious decision of casting a new actor to play Bob Biswas because I wanted to move away from ‘Kahaani’, this is not that film. The world of this film is different. This is a new film, which has its own standing.

“Through this film, we have attempted to create a new world of Bob Biswas which has a fresh new perspective to the story. That is in fact, one of the reasons why I did not direct the film. In the earlier film, when the introduction of Bob happened (referring to ‘Kahaani’) he only had a presence of eight minutes. Now, we have a full story on him.”

In the past, there were many such legendary characters in which the same actor played the character in different films.

For example, Goopi and Bagha are two such fictional Bengali characters created by Upendrakishore Ray Chowdhury. Later iconic filmmaker Satyajit Ray made three films based on those two characters. They were played by Bengali actors – Tapen Chatterjee and Rabi Ghosh, respectively.

Asked about why then he chose not to follow the same path as that of Ray, Sujoy explained, “I am saying it is not impossible to recreate the world of Bob Biswas where Saswata who played Bob earlier can be cast. In fact, if I was helming the film, Saswata would have been a choice, but Diya is directing the film and this is the choice she made. She has her vision to the film. Our idea is to create a new film, in which the world of Bob is different from what we have seen in ‘Kahaani’.”

The film is written by Sujoy, and directed by Diya Annapurna Ghosh.

This is the first time the fans will get to see Abhishek in a never-seen-before avatar in which his look is almost unrecognisable as a semi-bald and overweight middle-aged man.

Sharing his experience of working with Abhishek, Sujoy said, “I think Diya has done a great job of convincing him to become the character, written on paper. Abhishek put on weight, went all out in a complete lack of vanity to become the Bob we have seen in the trailer or will watch in the film for that matter. What was very good about Abhishek is his malleability…when I saw him in his final look, I got my Bob exactly the way I visualised so as a writer, I am very happy.”

Call of Duty Mobile Season 11: What Is The Release Date?

Greater Noida: The one-time settlement scheme launched by the Yamuna Expressway Authority for defaulting property allottees has been extended up to December 31. The scheme was drawing to a close on November 30, but the extension of another month has been provided to the allottees to seek the benefits being offered, officials have said.
More than 32,000 allottees stand to benefit through the scheme that was launched on October 1. The scheme is open for allottees under all the seven categories — residential, build-up housing scheme, institutional, industrial, commercial, mix-land use and abadi plots. For the first time, YEIDA had agreed to waive off the compounded penal interest component on the entire dues and levy only simple interest.
But instead of offline mode, the scheme was offered through a web portal. However, for the first fortnight or so, the portal did not function properly. “We told YEIDA to resolve the technical snags. Allottees were unable to submit their details online and whatever was entered could not be saved as draft,” said general secretary of the Yamuna Expressway Entrepreneurs Association, Rishabh Nigam.
Chief executive officer of the Authority, Arun Vir Singh said, “We are going to press only 8.50% simple interest to calculate the land premium dues. Some allottees sought more time to arrange for funds and hence we have extended the deadline.”
An applicant having dues up to Rs 50 lakh will have to pay up one-third of the restructured amount within a month and the balance two-third within three months. Those having more than Rs 50 lakh to settle will also have to pay up a third of the amount within a month. However such allottees will be given six months to pay up the remaining sum.
Continue Reading

A Tesla supplier says that it is working with about half a dozen other automakers taking the same approach.

Over the last few years, Tesla has been heavily investing in casting and alloy technology to enable larger casted parts that have the capability to greatly simplify manufacturing.

The company acquired several units of the biggest casting machines in the world. They have been deployed at Tesla’s factories in the US, Berlin, and China.

Tesla has already been producing the Model Y with a single rear body piece that replaced 70 different parts in the vehicle.

Earlier this year, a picture of the first single front casting part of the Model Y produced at Gigafactory Texas leaked.

Last month, we reported that Tesla produced the first Model Y with both front and back single-piece casting.

The strategy to greatly reduce the number of pieces to make a car body results in a massive reduction in the complexity of the body line and the capital needed to build the production line.

It also brings weight advantage to the vehicle itself, which in turn can improve efficiency. However, it’s not all advantage.

Some people in the industry have been critical of the cost associated with potential repair in the event of an accident. This is led to questions whether Tesla is leading a new way for the auto industry to build cars in the future or if it was a fool’s errand.

But now it looks like some other automakers are willing to give it a shot, especially in China.

The New York Times published a report on Liu Siong Song, an engineer behind LK Technology, a partner in Tesla’s casting technology.

Liu said that he is working with six Chinese automakers to deploy similar casting technology as soon as next year:

However, the engineer suggests that they might run into some issues:

“For all China’s progress, it still has a long way to go. LK hopes to deliver the same types of casting machines to many Chinese companies in the next two years. But some of those companies are struggling to find car designers of the type and talent that Tesla has aplenty. Without the designs, LK can’t deliver the machines.”

Aside from designs, other automakers might also run into some issues with materials.

Demon Slayer rounded out its Mugen Train Arc on Nov. 28, bringing Tanjiro’s mission with the Flame Hashira to a bittersweet end. Although “Set Your Heart Ablaze” will no doubt have fans feeling emotional, the conclusion of this arc also gives them a reason to be excited. The anime will officially move into never-before-seen territory with its next episode, which will kick off Demon Slayer Season 2’s Entertainment District Arc. What can fans expect from this new chapter, and when will it begin?

RELATED: ‘Demon Slayer’: How Many Arcs Does the Manga Have in Total? There’s Virtually No Filler

Demon Slayer Season 2 kicks off its Entertainment District Arc on Dec. 5, 2021. After seven episodes rehashing the events of the anime’s recent movie, many are excited to cover new ground in the coming chapter. According to Crunchyroll, the episodes in this arc will arrive on its platform an hour earlier than the Mugen Train installments. Fans can check for new ones at 7:45 a.m. PT every Sunday.

Per the anime streaming service, the Entertainment District Arc begins with a one-hour special and will cover the following storyline:

The teaser highlights pieces of this plot, promising plenty more action from Demon Slayer Season 2 in the process.

RELATED: ‘Demon Slayer’: Is Koyoharu Gotouge’s Manga Finished? Where to Read the Series in Its Entirety

Demon Slayer released a teaser for its Entertainment District Arc ahead of season 2, and the footage reintroduces the Sound Hashira, Tengen Uzui. He’ll be overseeing Tanjiro, Inosuke, and Zenitsu’s next mission, which will take them to Yoshiwara. There, they’ll be tasked with helping him find his missing wives. It seems a demon has been terrorizing the Entertainment District, and specifically, the women working there.

The teaser doesn’t reveal much else about the upcoming arc. However, it ends with Tanjiro using his Water Breathing, promising more battles between the Demon Slayer Corps and Muzan Kibutsuji’s minions. Likewise, Tengen looks like a force to be reckoned with. That alone should have fans hyped for the coming action sequences.

But outside of more major fights, what can fans expect from Demon Slayer Season 2 and its Entertainment District Arc?

What else to expect from ‘Demon Slayer’ Season 2

RELATED: Fall 2021 Anime – Which Shows Should You Watch?

Tanjiro and his friends are still reeling from the events of the Mugen Train Arc, but they don’t have much time to dwell on Kyojuro Rengoku’s recent battle as they dive into another mission. This one gives each of the anime’s main players a chance to shine, and it will see Tanjiro exploring new abilities.

If the most recent arc is anything to judge by, fans should also go into this one with the knowledge that nobody is safe. As the anime kicks into high gear, it stands to present its main characters with bigger obstacles and tragedies.